Depression in Your Life? Check Your Caffeine/Coffee Use...… The primary facilitators of depression are often simple to address but our conventional medical system insists that the public keep running east looking for a sunset. It's easier to rule a depressed and dis-empowered human and this is why medicine and government work hand in hand to keep the public rearranging the furniture on the deck of the Titanic. In Canada, in regards to depression, there's a mental health campaign in Canada titled, "Let's Talk About It" sponsored by Bell. (Bell is word that means Baal or "the devil/evil" in ancient cultures....Google that) Within this covert drug advertising campaign, you're permitted to talk about anything other than what's really causing your depression, so you never address the root cause. Bell's "Let's Talk About It" campaign is about normalizing depression and literally promoting solutions that guarantee the depression increases and accelerates. One root cause causes of depression is discussed below. Depression isn't a medication deficiency and although a chemical imbalance does indeed contribute to depression, those chemical imbalances are always caused by people having passionate mind control based love affairs with products, services and ways of thinking that cause those imbalances.
Coffee and Caffeine Cause Depression - the connection between depression and caffeine is well documented. This connection can be easily researched in the book by Stephen Cherniske titled, "Caffeine Blues". Conventional medical doctors aren't taught anything about caffeine facilitating depression. Coffee is our #1 most popular psychoactive substance and our society's most accepted drug addiction. Doctors often drink daily coffee themselves, which confirms what real health professionals already know.....that the medical system has nothing to do with health and that most paid actors claiming health knowledge often don't practice healthy habits personally. Don't ask a poor person how to be rich and don't ask a sick person how take care of your health. It's all wretch and no vomit.....it never gets there. Most hospitals have coffee shops or coffee machines in them today. The truth operates in plain sight. We just need to break out of our mind control to see the massive ambushes that are laid for us, before we ever enter this world. Poison can't make you happier or healthier. Poison doesn't work like that.
It should be noted that medical doctors have one of the highest suicide rates of any sub-section in the labor force. Suicide is linked to depression and the truth is.....all poisons can trigger extreme depression, with caffeine being a daily mega poison many people ingest daily. If your 'health professional" is caught up in the poison rituals of the day (like coffee, alcohol, take out food etc) this not only reflects a spiritual conflict of wearing the name tag "health professional" while not being healthy.... but it also reflects a disconnection between how poison affects the emotional centers of our bodies. Health isn't a degree that hangs on a wall. Health is a daily practice. You either have the daily practices or you don't.
Caffeinated teas effect the body in the same way, as do energy drinks, pre workout powders, caffeinated pops, chocolate etc. There are over 2000 medications that contain caffeine as well. Caffeine is also famous for instigating heart attacks, to the point where Health Canada was advised to place a heart attack warning on all energy drinks in the early 2000's. Although the science was firm regarding the amount of caffeine in energy drinks causing heart problems (especially in teens), Health Canada failed to act. The "health care" system is a system that flies a flag of health based altruism, while simultaneously parading the most open secret in the world today...….that the health care system promotes, maintains and fortifies ill health in the population, in order to facilitate ease of rule over a dis-empowered, diseased, dysfunctional and depressed citizenry. The health care system is also easily triggered at anytime as well to become the assassination wing of the ruling 1% hiding in government, which should be very obvious with what's going on today. If you're getting the impression that your world doesn't operate exactly as your government school and media taught you, you're starting to awaken to the truth...…..and it's inside that truth where your healing will begin. If you need help quitting your coffee or caffeine, please contact me at [email protected] and let's start addressing one root cause of your depression, which is caffeine addiction.
Article Regarding Coffee's Toxic Effects https://bit.ly/32FHkQa
Podcast Regarding Coffee's Toxic Effects https://bit.ly/3nZggBT
Podcast Regarding Coffee's Toxic Effects https://bit.ly/3ewwM9D
Video Regarding Coffee's Toxic Effects https://bit.ly/3vQPVJc 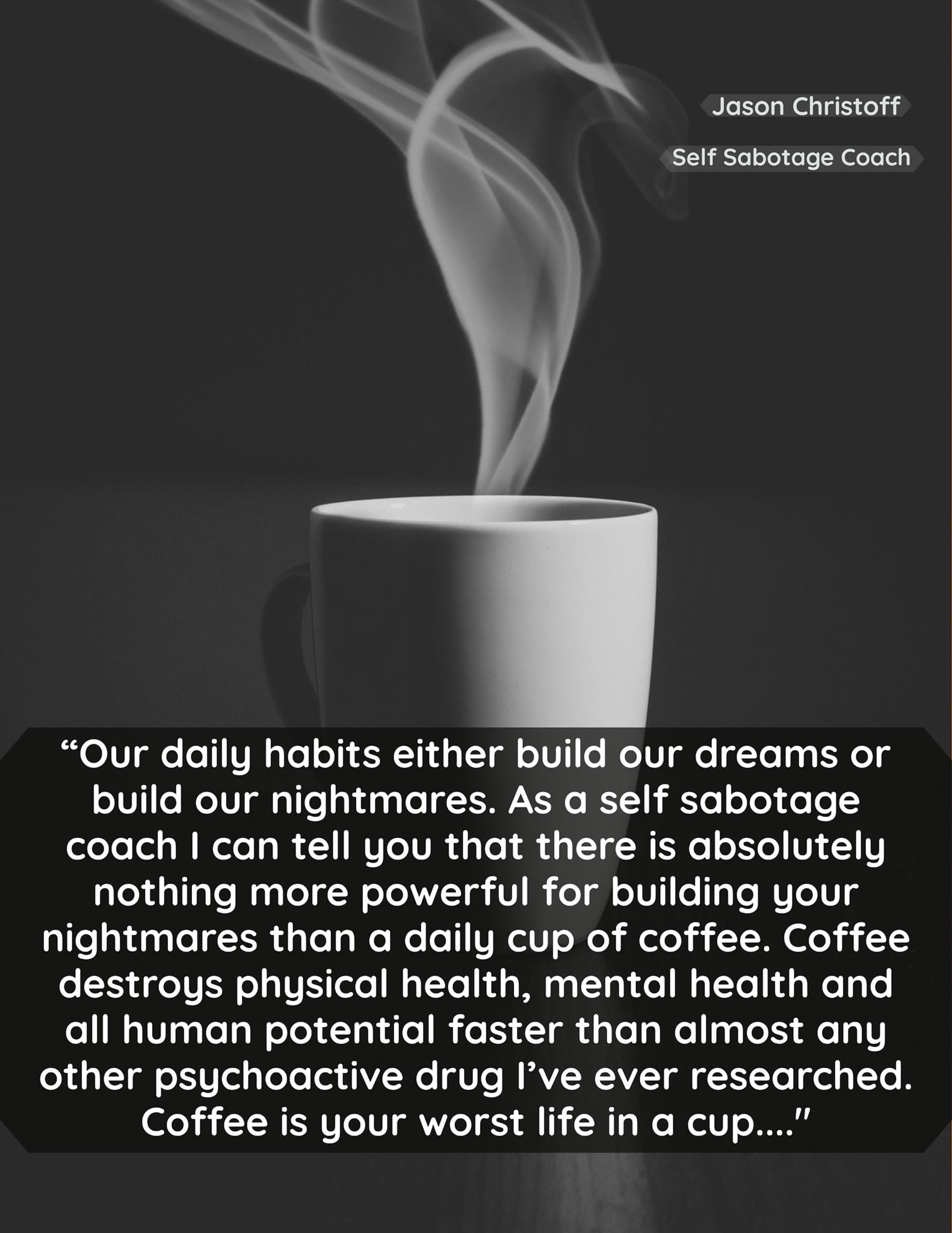