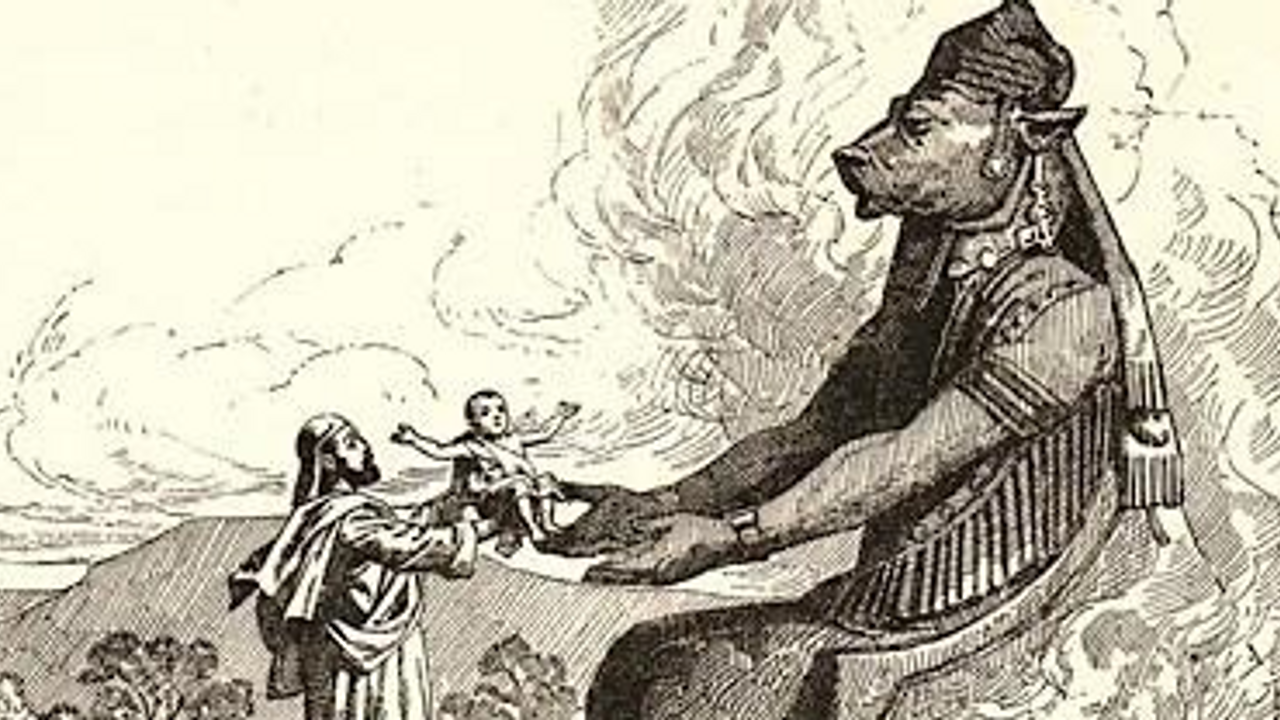 This is an ancient God called Molech. The effigy of Molech was always made of metal. The fire at the base of the statue was meant to heat the metal until it was red hot. The child was then placed on the red hot hands and immolated. Immolation is derived from Molech and means sacrifice by burning. The smoke that came from the child was deemed holy smoke and this is also why incense is thrown around in many similar ceremonies today. The phrase “holy moley” is also derived from Molech worship. The loud drumming, loud instruments and loud singing were meant to drown out the screams of the child.

This was done because this ceremony inserted a psychological fear based response in the public, which made the public easier to control, steal from, manipulate, govern and lie to. Fear as a weapon has always used by ancient ruling groups, for controlling the public. Nothing scares the human more than death, fear and panic. Fear and panic changes human brain chemistry to make a human more compliant and reflexively obedient to authority. Fear and panic is important for running a human farm, where the cattle do exactly as they’re told……so the energy of the human cattle can be directed for the goals of the ruling group. The bull cult would purposely target the children of the strongest parents, so real warriors never grew up in the society to challenge the psychopathic rule of the bull cult. The genetically weak were permitted to pass. The genetically strong were preemptively removed. Let’s fast forward to today. Do we see any similar patterns or similar control based attempts by certain groups, which may be disguised well enough for most not to notice? Even today you can see the words “charity” and “Eucharist” both have the word “char” within them. Char meaning a burnt offering. Do you know what’s going on? Are you sure? Where do you think we get the phrase “bun in the oven” from, regarding a woman who’s with child? Why would anyone think it was sane to compare pregnancy with placing a child in an oven? Yes, something isn’t right with that and many other things……as you will clearly see.

This ceremony in the picture was organized by this bull cult, from which we get the words bullet, bullion, bully, bulldozer, bull shitter and even the word “terrible”……which just means “terror-bull”. All negative words except for bullion. Bullion was named after the bull cult because it was the bull cult who originally smelted metal, to invent currency, which in turn has always been used to control the public in negative ways…..but only when the currency is under the control of the bull cult. Money, like everything else, can be used for good or evil. When the bull cult controls the money, only evil is conducted. Outside the NY stock exchange is a large bull, now housed on wall street. CLICK HERE This is why bull fighting (in many parts of Europe), the running of the bulls in Spain or jumping of the bulls in Greece are still with us today……..because everyone hated and wanted to metaphorically fight the bull cult. If you would like to know more about the bull cult and its long history of child sacrifice, you can ready the book at this added link. CLICK HERE To this day, many modern leaders attend ceremonies at Bohemian Grove in California, where ceremonies are conducted around an effigy of Molech. CLICK HERE Why do our political leaders gather here?

In Philadelphia at Thomas Jefferson University there’s a metal bull version of Molech, with the evident “trap door” on the side, so children can be immolated. CLICK HERE The metal bull is said to represent the patron saint of physicians St. Luke. How does a saint become a bull that killed children? Thomas Jefferson University includes both a hospital and a medical school. The cement post that holds up this metal bull (with the child sacrifice trap door) is adorned with the name of many physicians, who in turn invented medical applications that hurt and destroy children. Thomas Jefferson University is very close to a child’s hospital called CHOP. (meaning Children’s Hospital of Philadelphia) At CHOP works a man called Dr. Paul Offit, CLICK HERE one of the world’s primary proponents of child vaccination. Why would you name a children’s hospital CHOP? The word Philadelphia is derived from the Greek Temple of Delphi, where live sacrifice used to occur. Goats were said to be used but many scholars suspect humans as well. Baby goats are also known as “kids”. Why would they call baby goats “kids” and then sacrifice them at Delphi temple? The word Philadelphia translates to “fill the Delphi temple.”.

Dr. Paul Offit (a man that profits personally from vaccination) once said that a child “could safely receive 10,000 vaccines”. This statement is odd as vaccines include documented poisons as routine ingredients and no vaccine HAS EVER been proven to increase immunity or resistance to disease in real world populations, outside labs looking for antibody confirmation of immunity. Vaccines have only been proven to increase disease and accelerated death rates. CLICK HERE for 34 documentaries that explain that exact fact. The cult of Molech also sacrificed teen virgins (around the world) and the HPV cervical cancer vaccine (Gardasil) has been targeting younger females (and killing/injuring them) to the point where a documentary about this attack was made titled “Sacrificial Virgins” CLICK HERE Even the word Holocaust literally means a burnt animal sacrifice, completely consumed by fire. CLICK HERE And to add on top of that, in ancient Kabbalah, the killing of “the slaves” (goyim or gentiles) was considered a more optimal sacrifice because the slaves were lower or darker than even animals (or even rocks) and therefore slaves (us) were a preferred sacrifice because it helped remove “darkness” from this world and bring more of God’s light back to the planet. CLICK HERE In short, there’s a long history on this planet of a) the ruling group believing that they’re superior to most others and b) this ruling group has an even longer history of making up stories about us, to justify our killing, slavery and perpetual domination. In psychology this is called projection, where you project your evil and mental defects onto others because you can’t process your own darkness personally. Ladies and gentleman, we are being dominated by psychopathic mental defectives to this very day, as they are guided by ancient psychopathic narratives written down in our ancient past. We are now inside a world wide holocaust offering, organized by this ancient group and they’re using the COVID-19 narrative to trick people into poisoning and sacrificing themselves.

Why is a child’s hospital called CHOP and why is an ancient sacrificial mechanism that used to burn children alive outside a medical institution? Why is our current society attempting to de-evolve into a situation where the high priests of medicine are in full control of the collective? Do you know what’s going on? Are you sure? Are you not seeing that the entire world government structure is now trying to inject a known poison into all people, under the guise of “health and safety”. Tens of thousands of medical doctors and PhD scientists have come forward to warn that the COVID shot needs to be stopped immediately and that this injection IS NOT A VACCINE and has nothing to do with health on any measure. CLICK HERE As this article is written, the government is now trying to vaccinate the children, even though children were collapsing at mass vaccination clinics in Australia, where this mass child vaccination campaign was first rolled out officially. The other parts of the world are slated to follow. CLICK HERE and CLICK HERE

The more things change, the more the stay the same because this mentally defective group of psychopathic murderers know how to dress their ancient evil up in modern disguises, in order to fool the goyim over and over again throughout the ages. The clip below is the 3 children who collapsed and went into coma’s at Sydney Australia’s Olympic Stadium during the mass vaccination drive for children. Molech knows how to disguise itself very well in our modern time. As the uninformed slaves administer the poison to the children and protect the evil, Molech sits back and knows his sacrifice is being carried out by the slave class AS USUAL. Under satanic doctrine, the high priests keep their hands clean by paying the slaves to kill each other. Many more children have died and were injured during this organized sacrificial ritual CLICK HERE, they were just out of camera view, as the paid slaves of Molech always scramble to protect the evil system from view, when the children are killed or injured. Every person is that video is paid to conduct evil and they’re also programmed (via documented mind control tactics) to believe that they’re HEROES saving the day. In the backroom of politics, these people are always referred to as “useful idiots”. The people in the video are dependent on the system for their survival and they are weaponized against the rest of us. They carry out the evil, so no karmic blow back impacts the high priests, who are giving the commands. In the spirit world and ancient religious doctrine, the people who carried out the evil go to hell, not the one giving the evil commands.

You may want to start connecting the dots because our current crisis is about the general public starting to find out what’s really going on……..and certain people in high places are scrambling to lock the public down permanently (physically and mentally), so more regular folks don’t understand where they live, who’s in control and what these institutions are really for. Could you be living right in the middle of a child sacrifice cult and not know it? Do you believe what you see or do you see what you already believe? Because there’s a big difference. Protect your children. This ancient group is still here and they’re disguised as government, medicine, science and media. They’re coming hard at the children this fall. Be ready. They’re going to tie schooling to sacrificing your children via medical poisoning. Get ready to step between evil and your children. Protect your children as the creator intended. Let Gandalf The Grey give you a little lesson on how to protect the children in this video. And to end, Gandalf is fighting something called the BALrog. The word Bal or Baal is….you guessed it…..a bull God, Molech. Please also notice the word BAL in KaBALlah as well, where KA is Egyptian for spirit. The spirit of Molech. Connect the dots. Something’s not right on this planet. CLICK HERE to explore Molech’s most clever disguise….which is the medical system. Do you know what’s going on? Are you are sure?